Dragonfly Migration Through The Maldives 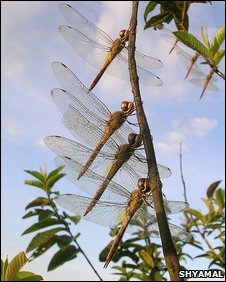 Every year, millions of dragonflies fly thousands of kilometres across the sea from southern India to Africa.

So says a biologist in the Maldives, who claims to have discovered the longest migration of any insect.

If confirmed, the mass exodus would be the first known insect migration across open ocean water.

It would also dwarf the famous trip taken each year by Monarch butterflies, which fly just half the distance across the Americas.